Welcome to Music Friday when we bring you wonderful tunes with jewelry, gemstones or precious metals in the title or lyrics. Today, jewelry items play key roles in “All I Left Behind,” a hauntingly beautiful song featuring the harmonies of Emmylou Harris and Linda Ronstadt. 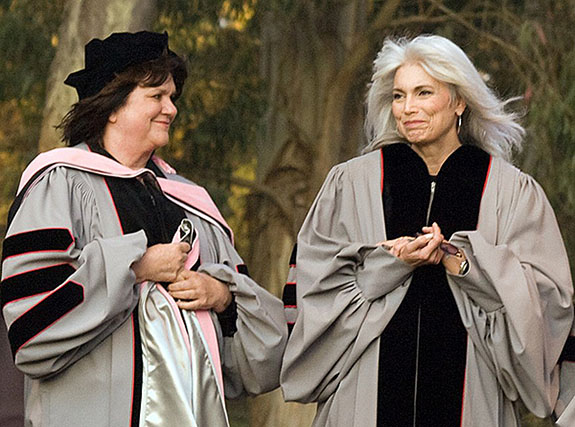 Recounting the story about a woman who unselfishly puts her life on hold to go on the road with her lover, “All I Left Behind” details the items she lost along the way, which include her silver earrings and her dad’s gold bracelet. In the end, she loses her lover, as well.

Harris and Ronstadt sing, “Silver earrings in Wichita / Beaded moccasins in Tonopah / But I had you so, I just let them go.”

In a later verse, they tell the story of a cherished keepsake: “And the gold bracelet with my father’s name inscribed / On the back by the one who loved him all her life / The way I too could have loved you.”

Written by Harris, along with sisters Kate and Anna McGarrigle, “All I Left Behind” appeared as the 12th track on Western Wall: The Tucson Sessions, a Ronstadt/Harris duet album featuring songs written by some of the most successful names in the business, including Jackson Brown, Rosanne Cash, Sinéad O’Connor and Bruce Springsteen. Singing background vocals and playing the harmonica on the album was none other than Neil Young.

“It took more than 25 years, two divergent careers and plenty of false starts, near-misses and might-have-beens, but Linda Ronstadt and Emmylou Harris have finally made an album together,” wrote Bill DeYoung for Goldmine magazine back in 1999.

“I believe that there’s a poetic thread that holds [the songs] together,” Harris told Goldmine. “I think they all deal with very deep issues about life and love and longing and loss. For me, an album has to be a string of pearls, but they’re all slightly different. They’re not perfectly matched pearls.”

The album — featuring the songbird soprano of Harris and the velvety alto of Ronstadt — earned critical acclaim, hitting #6 on the Billboard Country albums chart while earning several Grammy nominations.

(The photo, above, shows Ronstadt and Harris receiving honorary doctorate degrees from Boston's Berklee College of Music in 2009.)

The 75-year-old Emmylou Harris boasts a stellar career spanning seven decades. Since recording her first album in 1969, she has accumulated 14 Grammy awards and 48 Grammy nominations. She became a member of the Country Music Hall of Fame in 2008 and was presented with the Grammy Lifetime Achievement Award in 2018.

Ronstadt, 76, is a 2014 inductee into the Rock and Roll Hall of Fame. She has released 24 studio albums and charted 38 Billboard Hot 100 singles. She has earned 11 Grammy Awards, three American Music Awards, two Academy of Country Music awards, an Emmy Award, a Tony nomination and a Golden Globe nomination.

We hope you enjoy the audio track of Harris and Ronstadt performing “All I Left Behind.” The lyrics are below if you’d like to sing along…

Silver earrings in Wichita
Beaded moccasins in Tonopah
But I had you so, I just let them go

The flannel shirt I wore to keep me from the cold
When we drove from Boston all the way to Buffalo
The leather boots I bought, so many miles ago
I took them off to follow you into the Ohio

Never did my armor feel so thin
Silk was all I had between me and your skin
Like Waterloo, I lost that too

And the gold bracelet with my father’s name inscribed
On the back by the one who loved him all her life
The way I, too, could have loved you

The Spanish shawl, I put across the broken shade
Of the lamp that lit the room that last night near Coeur d’Alene
Only little things inconsequential I could say
Of all I left behind with you along the lost highway