More than 2.5 million people from every corner of the Earth journey to Rockefeller Center in New York City each year to see a spectacular Christmas tree topped by a 900-pound star sparkling with 3 million Swarovski crystals.

Designed by renowned architect Daniel Libeskind, the mammoth star has a wingspan of 9 feet 4 inches. Each of the 70 rays of the Swarovski Star is designed to glow from within, with the light refracted by the crystal surface, creating a sparkling effect. 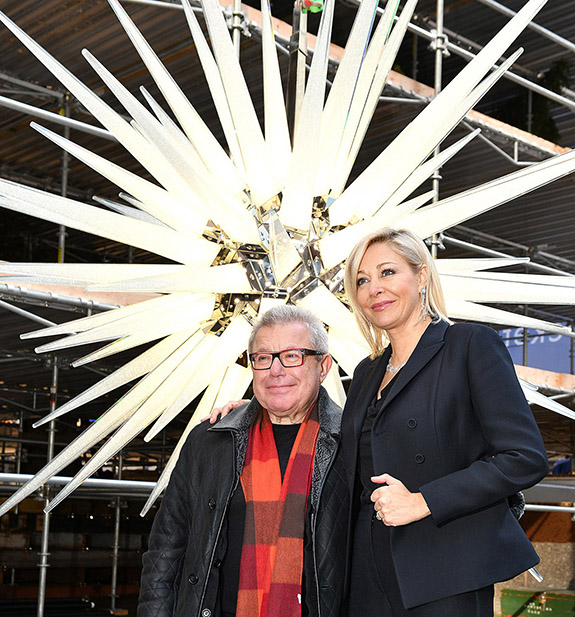 When the star made its debut in 2018, Libeskind said his tree-topper was inspired by the beauty of starlight — something that radiates meaning and mystery into the world.

“The Star is a symbol that represents our greatest ambitions for hope, unity and peace,” he said in 2018. “I am tremendously honored to collaborate with Swarovski on the Star, and with the entire design team, to bring cutting-edge innovation and design to crystal technology.”

The current star replaced a more diminutive Swarovski Star that had been in service since 2004. That star weighed 550 pounds and was studded with 25,000 crystals, about 8% of the tally of the current star.

This year's Rockefeller Center tree is an 82-foot-tall, 50-foot-wide Norway Spruce from Queensbury, NY, about 200 miles north of Manhattan in the Hudson Valley. It weighs in at a formidable 14 tons.

The tree was hoisted into position on Saturday, November 12, and was soon wrapped with more than 50,000 multi-colored LEDs strung over five miles of wire. The formal tree lighting took place during a live NBC broadcast on November 30.

Rockefeller Center officially began its tree-lighting tradition in 1933, when a Christmas tree was erected in front of the then-RCA Building and covered with 700 lights. The lighting ceremony has been broadcast live since 1951.

If you're planning to be in Manhattan in the near future, there's still time to experience this bucket-list spectacle. The tree will remain lit at least until January 6. Rockefeller Center's website has yet to officially announcement when the tree will be taken down, but other sites are reporting that it will be Sunday, January 15.

So, what happens to the 14-ton tree when the season is over? Since 2007, the wood has been donated to Habitat for Humanity. The tree is milled, treated and made into lumber, which is then used to build homes for people in need.

The heartwarming gesture inspired a children's book called The Carpenter’s Gift, which was written by David Rubel and illustrated by Jim LaMarche. It was published in 2011 in collaboration with Habitat for Humanity.