Egypt’s Supreme Council for Archaeology recently unearthed ancient mummies with solid gold tongues in their mouths at a site 40 miles north of Cairo on the Nile Delta.

Archaeologists believe the mummies' actual tongues had been replaced by golden replicas during the embalming process so the deceased could communicate with Osiris, the Egyptian god of the underworld. Also discovered on the bones of several mummies were solid gold flakes, scarabs and lotus flowers. 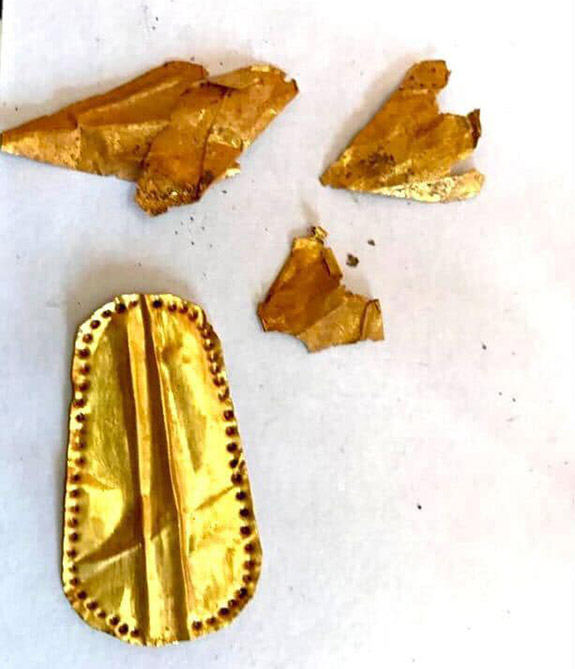 The gold-tongue mummies were found during newly extended excavations of the Quewaisna necropolis that had been first explored in 1989. Salvaged items from the site — including amulets, figurines and pottery — have been dated from 300 BCE to 640 CE, and cover the Ptolemaic and Roman periods of Egyptian history. The mummies are believed to be more than 2,000 years old.

This wasn't the first time Egyptian archaeologists encountered golden tongues. In 2021, archaeologists made similar discoveries in both the coastal metropolis of Alexandria and the small village of El Bahnasa, about 130 miles south of Cairo.

It is likely that Egyptian embalmers equipped the deceased with golden tongues so they could better navigate the afterlife. It is well known that Egyptian mummies have been entombed with personal possessions and valuable items, such as food and wine, furniture, clothing, pottery and jewelry.

But the gold tongues are likely connected to Osiris, the Lord of Silence, who enforced a strict rule of speechlessness in the underworld. Ancient Egyptians may have believed that a golden tongue would allow the deceased to communicate with Osiris without making a sound.

The ancient Egyptians described gold as “the flesh of the gods” and believed the gleaming element possessed spiritual powers. Gold was also associated with Ra, the Sun God, who was the king of the deities and the father of all creation. He was the patron of the sun, heaven, kingship, power and light, according to egyptianmuseum.org.

Credits: Images courtesy of the Egyptian Ministry of Tourism and Antiquities.