Hardly a stranger to over-the-top jewelry, Canadian recording artist Drake shook up the Internet Tuesday by revealing "Previous Engagements," a necklace made from 42 eye-popping diamonds earmarked for marriage proposals that never came to be. The diamond total weight of the piece is 351.38 carats, putting the average center stone at 8.36 carats. 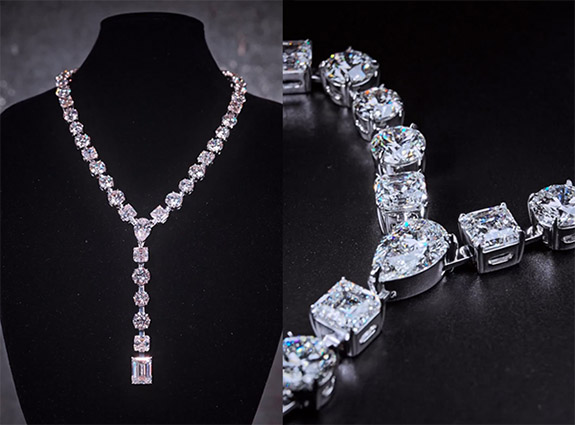 The necklace — commemorating "all the times he thought about it, but never did" — was designed and fabricated by New York City-based celebrity jeweler Alex Moss, who posted a short video of "Previous Engagements" on his business's Instagram page.

The voice-over describes the necklace as a "monumental art piece" and a "true wonder of the jewelry world." Drake's hand-selected diamonds — in round, pear, Asscher and emerald shapes — are set in 18-karat white gold utilizing the eagle claw technique.

Moss told E! News that "top to bottom" the entire project took 14 months to complete, adding that “No other details can be disclosed, other than the fact that this is the most insane chain ever made.”

Drake fans were dazzled not only by the jewelry, but also by the fact that the 36-year-old chart-topper had been involved in 42 proposal-worthy relationships.

Assuming that his quest for the perfect partner began when he was 18, that means he's averaged nearly 2.5 engagement contemplations — and significant diamond picks — per year.

It's not clear if any of the 42 center stones was ever set into an engagement ring.

The Toronto-born singer-songwriter, who has sold more than 170 million records worldwide, has been romantically linked with a number of high-profile celebrities, including Rashida Jones, Tyra Banks, Rihanna, Serena Williams, Kat Dennings and Jennifer Lopez.

The self-proclaimed “Certified Lover Boy” reportedly wore "Previous Engagements" for the first time during a concert in Atlanta this past Saturday at State Farm Arena.

You can check out the short video of "Previous Engagements" at Alex Moss's Instagram page here.