An obscure third-century Roman emperor, once written out of the history books as a fictional character, was likely the real deal, according to researchers at University College London. 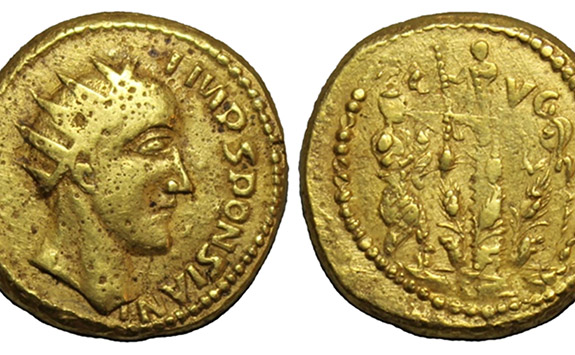 By using microscopes, ultraviolet imaging and infrared spectroscopy, researchers led by Professor Paul Pearson determined that the fine scratch marks on the surface of coins bearing Emperor Sponsian's likeness proved that they were in circulation 2,000 years ago and couldn't be modern forgeries. The findings were recently published in the journal PLOS 1.

The only historical reference to Emperor Sponsian is a portrait of him that appeared on a small cache of gold coins discovered in Transylvania 309 years ago. At first, the coins were believed to be genuine, but by the mid-1800s that opinion had flipped 180 degrees.

Henry Cohen, a scholar at the Bibliothèque Nationale de France, declared in 1863 that the Sponsian coins were "very poor quality modern forgeries." Cohen described the obverse of the coin as "barbaric and strange" and pointed out that the coins were cast instead of struck. (Casting was a method used by forgers.) The Sponsian coins were also unusually heavy compared to similar Roman coins of that period.

At the time, historians surmised that if the coins were fake, Sponsian was likely a fake character, as well.

The Sponsian coins discovered in 1713 eventually found their way to the Hunterian Museum at Glasgow University, where they remained locked away in a cupboard.

That's until Professor Pearson decided to revisit the mystery of Emperor Sponsian and the crudely designed coins.

Pearson and his team discovered that the Sponsian coins all bore similar patterns of microscopic wear apparent on authentic coins of the third century. A chemical analysis of the dirt caked on the coins confirmed they had been buried for a prolonged period of time.

The wear marks confirmed that the coins were handled in countless transactions over an extended time period and that they were used as a part of a monetary economy, Pearson reported.

"What we have found is an emperor," Pearson told the BBC. "He was a figure thought to have been a fake and written off by the experts. But we think he was real and that he had a role in history."

So, if Sponsian really existed, why don't we know more about him?

Researchers believe that Sponsian was a Roman army officer who was in charge of a remote province called Dacia, in what is now Romania. It was the year 260 AD, and Dacia was physically cut off from Rome during a period of chaos, civil war and a pandemic.

It is believed that Sponsian was "on an island" and had no way of communicating with the supreme command, so he did what he had to do in order to protect the civilian and military populations. One of those things was to declare himself emperor and another was to mint coins so the province could have a functioning economy.

This would theoretically explain why the Sponsian coins were so unlike other coins minted by the Romans at that time.