Armed with a powerful XP Deus metal detector, 69-year-old David Board took another stab at a long-forgotten hobby. It had been nearly 50 years since Board scoured the beaches of Dorset on England's southwest coast in the hopes of recovering valuable treasure. He hadn't found much back then, but a family friend encouraged him to try his luck again since he was newly retired. 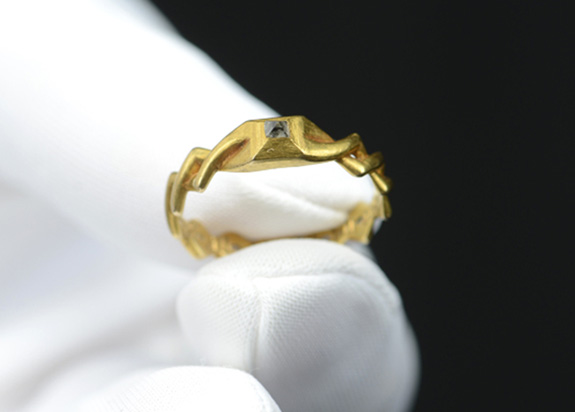 Board got permission to search the pasture of a local farm near Thorncombe. The farmer was an employer and friend for many years. Board had driven a milk tanker for his operation.

On his third pass through the field, Board got a strong signal near a footpath. At a depth of 5 inches, he exposed what at first glance seemed to be a candy wrapper. But then looking more closely he realized it was a muddy piece of metal and stashed it in his top pocket. 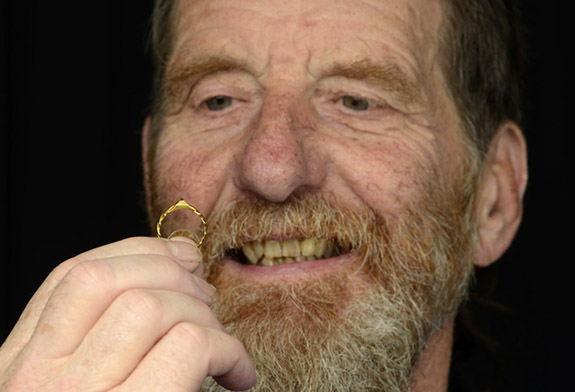 "It was once I got home and washed it off that we realized it was a lot better than we thought," he told CNN.

The Finds Liaison Officer Lucy Shipley took the ring to the British Museum and confirmed that it was Medieval in date. The stunning piece is now known as "The Lady Brook Medieval Diamond Ring," a very rare example of what high-end bridal jewelry looked like in the late 1300s.

Board told BBC News that this was a "once in a lifetime" discovery.

“This ring is in almost perfect condition and has an inverted diamond set into the raised bezel so that it comes to a point," explained Nigel Mills, Consultant (Coins and Antiquities) at Noonans, where the ring will be auctioned later this month. "The hoop is composed of two neatly entwined bands symbolizing the union of the couple."

Inside the band is an inscription in French "ieo vos tien foi tenes le moy," translating as "I hold your faith, hold mine."

The property on which the ring was discovered had been acquired by Henry de Broc (or de la Brook) from Reginald de Mohun (1206–1258), Feudal baron of Dunster in Somerset. The baron had inherited this land from his first wife, Hawise Fleming, daughter and heiress of William Fleming. It then passed by descent through the Brook family, coming into the possession of the wealthy landowner Sir Thomas Brook (c.1355-1418).

The auction house noted that, due to the exceptionally fine quality of this ring, it was quite possibly the wedding ring given by Sir Thomas Brook to his wife Lady Joan Brook for their marriage in 1388.

Noonans noted that the ring reflects the medieval notions of chivalry and courtly love that were at their zenith at that time.

The ring is expected to fetch up to £40,000 ($47,000) when it's offered for sale by the London-based auction house Noonans Mayfair on November 29, 2022. The proceeds will be split between Board and the landowner, according to BBC News.

Board said he will use his share of the money to help his partner's daughter secure a mortgage.