Mark Your Calendar: The First Day of Spring Is Also National Proposal Day

If you missed last month's chance to pop the question on the most romantic day of the year, Valentine's Day, or on the once-in-a-lifetime true Twosday (2/22/22), there's another fine date around the corner — Sunday, March 20. Not only is that the first day of spring, it's also National Proposal Day. 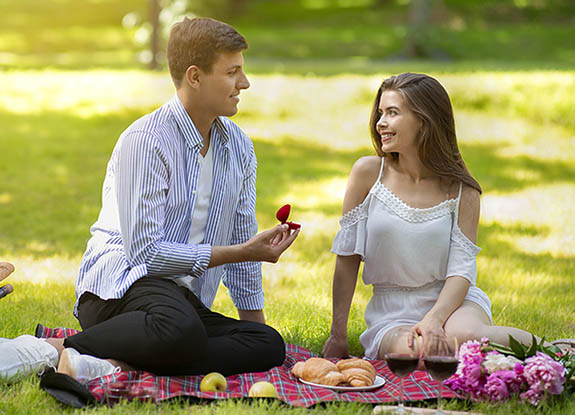 Conceived by John Michael O’Loughlin decades ago as the perfect time for procrastinating lovers to finally ask for their partners’ hand in marriage, National Proposal Day has slowly become an accepted part of our holiday lexicon.

O’Loughlin picked the vernal equinox (first day of spring) as the ideal day for couples to make the ultimate commitment to each other because it’s the special time of the year when day and night are equal lengths worldwide. O’Loughlin reasoned that this symbolizes “the equal efforts of the two required to comprise the successful marriage.”

The romantic O’Loughlin created National Proposal Day after watching his cousin wait years for a proposal that never came. He felt that a special day earmarked for proposals would put a fire under some partners who have waited a bit too long to pop the question.

O’Loughlin promoted National Proposal Day as a worldwide event and encouraged romantic couples to connect with like-minded friends via social media using the hashtag, “proposalday.” O’Loughlin, who registered the name Proposal Day!®, clarified that March 20 doesn’t have to end with a proposal. It can be used, instead, to spark a conversation about a future proposal.

According to O’Loughlin, by opening the door on a delicate subject and generating an opportunity for an honest discussion about their future together, couples could use the holiday to discuss the path ahead.

If you’re wondering if the autumnal equinox — another perfectly balanced day — would carry the same symbolism as the spring version, your hunch is right. There is a second National Proposal Day on the first day of fall, Thursday, September 22.

According to WeddingWire, about 40% of all proposals take place between Thanksgiving Day and Valentine’s Day. For years, Christmas Day was the most popular day to get engaged, followed by a wintry mix of favorites that included Christmas Eve, Valentine’s Day, New Year’s Day and New Year’s Eve. More recently, Valentine's Day moved into the #1 position.