Liquid rubies and sapphires rain down from metal clouds on an enormous "hot Jupiter" exoplanet located 855 light years from Earth, according to an international group of astronomers from the Munich-based Max Planck Institute for Astronomy. The team's findings were recently published in the journal Nature Astronomy. 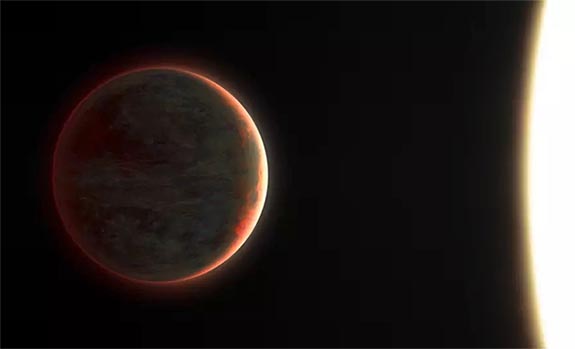 Located in the constellation Puppis, the exoplanet WASP-121b circles its host star in just 30 hours. It's about twice the size of Jupiter, made mostly of hot gas and is tidally locked, which means that one side of the exoplanet always faces the blazing hot star and the other side always faces cold, dark space.

According to the researchers, this extreme temperature difference between the two hemispheres gives rise to strong winds that sweep around the entire planet from west to east at 18,000 kilometers per hour. Spectroscopic analysis indicates that the clouds on WASP-121b mainly consist of metals, such as iron, magnesium, chromium and vanadium.

Airborne metals and minerals simply evaporate on the hot dayside, but new evidence from NASA’s Hubble Space Telescope indicates that temperatures drop low enough on the nightside for the metals to condense into clouds, resulting in rain that might look like liquified gemstones.

Corundum, the mineral family that includes rubies and sapphires, is made from aluminum oxide. Rubies owe their red color to trace amounts of chromium replacing aluminum in chemical makeup of the mineral. Sapphires get their color from trace amounts of iron and titanium.

Curiously, aluminum and titanium (two key ingredients in the corundum cocktail) were not among the gases detected in the atmosphere of WASP-121b. The scientists said a likely explanation for this is that these metals have condensed and rained down into deeper layers of the atmosphere, not accessible to their observations.

According to NASA, WASP-12b is a doomed planet. The hot Jupiter is orbiting so close to its parent star, it's literally being torn apart. Gravity causes enormous tidal forces, which are stretching the planet into the shape of an egg. The star's gravity also pulls material off the planet into a disk around the star. In 10 million years, predicts NASA, this alien world could be completely consumed.

Hot Jupiters are defined as Jupiter-like giant gas planets on close orbits around their parent stars, separated by only a few stellar diameters. Of the almost 5,000 known exoplanets, more than 300 are classified as hot Jupiters.