'The Enigma' Fetches $4.29MM, Thanks to 9-Minute Overtime Bidding Session

As the countdown timer clicked down to 0:00, it appeared as if the 555.55-carat black carbonado diamond known as "The Enigma" would be sold at Sotheby's online auction yesterday for the rock-bottom price of £1.5 million ($2.03 million). 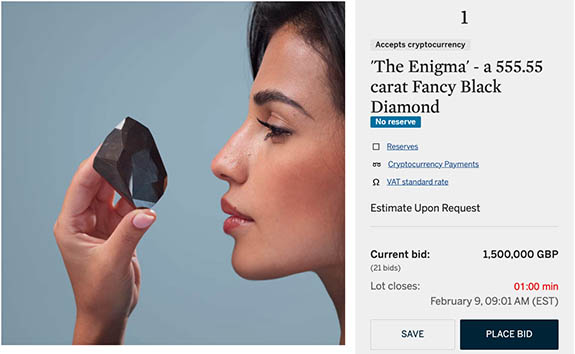 Pre-sale estimates were as high as £5 million and Sotheby's London was offering the stone with "no reserve," meaning that the highest bid would be the winning bid, with no minimum required.

But as baseball legend Yogi Berra famously said during the Mets' unlikely run to the divisional championship in 1973, "It ain't over till it's over."

Suddenly, Sotheby's counter came back to life and we were in overtime. The deadline was extended by one minute, and more bids continued to roll into the site.

Then two more minutes were added, and then another three. In all, the auction, which had been running for six days and was due to close at 9:00 AM EST, was extended to 9:09. During that bonus time, eight more bids hit the site, driving The Enigma's final price to £3.161 million ($4.29 million).

"I won the world's largest cut diamond for our #HEXican cultural heritage!" Heart tweeted. "'It'll be called the HEX.com diamond, it weighs 555.55 carats and has 55 facets. Congratulations to all you #HEXicans..."

It was certainly a wild ride for the stone billed as the largest faceted diamond of any kind to appear at auction. In the weeks leading up to the sale, the world's most highly trafficked news sites had written breathless stories about the unusual black diamond with interstellar origins.

Yesterday, with 42 minutes left in the sale, The Enigma had attracted only 17 bids and a top offer of £1 million.

But during the final two minutes, a run of four bids pushed the price to £1.5 million — and that's where we thought it would end.

The extra nine minutes more than doubled the result.

The fascinating black diamond had been revealed to journalists at Sotheby’s Dubai in mid-January. It was the first stop of a publicity tour that continued to Los Angeles and then to London for the online sale, which started on February 3. Sotheby’s told the press that it would be accepting cryptocurrency, a strategy aimed at attracting younger, digitally savvy buyers.

The Enigma, Sotheby's explained, was likely formed in outer space and brought to earth by meteorites. Earth-formed diamonds often display a crystal structure, while carbonado diamonds — in their natural form — have an irregular surface that resembles charcoal.

The Enigma officially entered the Guinness Book of World Records in 2006 as the “Largest Cut Fancy Black Diamond.”