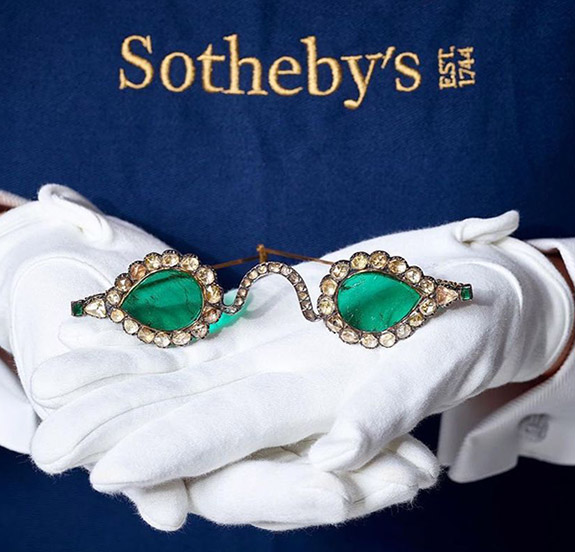 Believed to have belonged to royals of the Mughal Empire, the eyewear tells the story of royal patronage, luxury, science, faith and beauty all in one moment, according to a Sotheby's Instagram post.

"The quality and purity of the gemstones is itself extraordinary, cleaved from a single natural Indian diamond weighing over 200 carats, and a brilliant Colombian emerald weighing at least 300 carats," noted Sotheby's.

"As far as we know, there are no others like them," he said, adding that the gemstones required to make them would have surely belonged to a person of high social status, such as the emperor, a member of his inner circle, or high-ranking courtier.

Gibbs told CNN that in the Islamic religion practiced by the Mughal rulers, green was closely linked to paradise, salvation and eternal life. He said that the emerald glasses may have given the wearer the experience of being led "through the gateway into paradise."

The optical properties of emeralds were also recorded by Pliny the Elder (23–79 AD), who described how Roman Emperor Nero watched gladiatorial fights through a pair of concave emeralds. There is some debate as to whether the emeralds helped to correct the Emperor's severe near-sightedness or just eliminated glare from the sun. Others believe the emeralds may have soothed his eyes from the sight of blood.

Sotheby's featured glasses will be touring New York, Hong Kong and London before hitting the auction block on October 27.