2021 Edition of Miami Hurricanes' 'Turnover Chain' Is Emblazoned With 2,754 Sapphires

The Miami Hurricanes unwrapped the 2021 edition of their famous "turnover chain" during the team's season opener against the #1-ranked Alabama Crimson Tide in Atlanta on Saturday afternoon.

Despite being behind at the time by 27 points, the defensive unit celebrated when Kamren Kinchens forced a fumble during the second quarter at Mercedes-Benz Stadium. As part of a tradition started in 2017, any Hurricanes player who creates a turnover gets to wear a massive, gem-encrusted pendant to celebrate his accomplishment. This year's design is in the shape of a Miami Hurricanes helmet and is emblazoned with 2,754 sapphires. 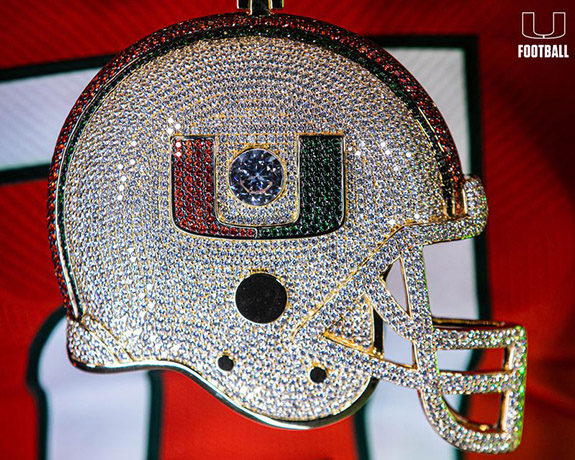 The pendant is set with 2,245 white sapphires, 366 orange sapphires and 143 green sapphires to mimic the helmet colors. The pendant is fabricated from 1,000 grams (2.2 pounds) of gold and dangles from a massive Cuban-link chain that weighs 3,500 grams (7.7 pounds) and is roughly 34 inches long. The university reported that the piece took three months to complete.

After the fumble, Kinchens bounded to the Hurricanes' bench, where he posed for the fans and TV cameras with the over-the-top jewelry hanging from his neck.

Unfortunately, officials on the field were reviewing a video of the play and decided that the offensive player had recovered his own fumble. The decision on the field was reversed and Kinchens quickly removed the jewelry and ran back on to the field. TV cameras followed the path of the bling as coaches returned it to a secured case.

During the third quarter, Hurricanes lineman Chantz Williams stripped the ball from Alabama's quarterback and fellow defensive lineman Jordan Miller jumped on the loose ball, netting the defensive unit's first official turnover of the season. Finally, the players got to show off the 2021 version of the turnover chain.

The celebratory turnover chain is the team’s fifth design in five years. The first incarnation of that chain, in 2017, featured a diamond-encrusted “U” hanging from a Cuban link chain. The 2018 edition highlighted a jeweled Sebastian the Ibis, the team’s mascot, but no “U” logo. The 2019 version was a diamond-adorned “305,” a number that refers to the South Florida area code. In 2020, the university rolled out a Florida-shaped pendant that weighed 300 grams and was dotted with 4,000 sapphires set in 10-karat yellow gold.

The Miami Herald reported that since the chain's creation in 2017, the Hurricanes have forced 92 turnovers, which is third among the "Power 5" teams. Only Clemson (97) and Alabama (95) have had more. The Power 5 conferences are the highest rated in the country and include the SEC, Big Ten, Big 12, Pac-12 and ACC.

The #15-ranked Hurricanes were defeated by the Crimson Tide 44-13, but return to Miami's Hard Rock Stadium on Saturday, September 11, to face the Appalachian State Mountaineers in their home opener.