Seventy-seven perfectly matched cabochon-cut emerald "leaves" sprout from a diamond-studded golden branch in this stunning necklace from the Smithsonian's National Gem Collection. The piece boasts 350 carats of Colombian emeralds and provides one of the world's most unique displays of May's official birthstone. 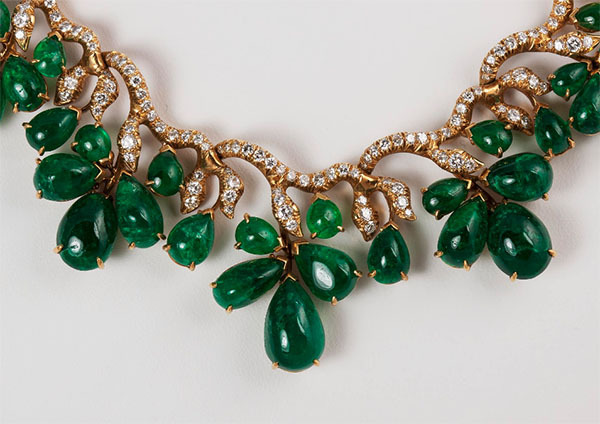 Designed in the mid-1960s by Julius Cohen, the piece was donated to the Smithsonian by Margaret M. Sokol in 2007 and is now a permanent resident of the National Museum of Natural History in Washington, DC. 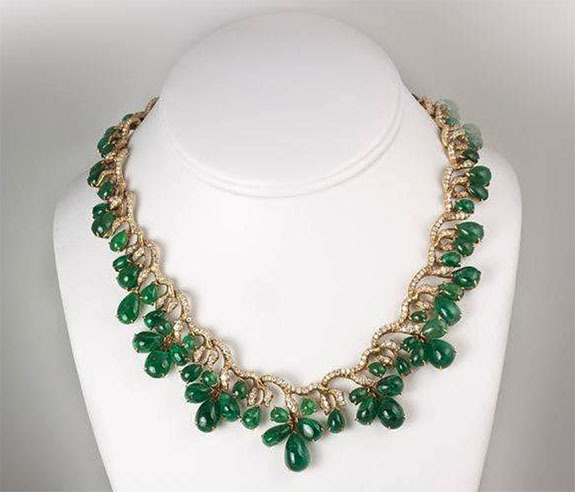 Emerald has been cherished for thousands of years.

More than 3,300 years ago, the biblical Aaron dazzled his followers with a gleaming breastplate fashioned with gemstones representing the 12 tribes of Israel. The very first of the inscribed gems was an emerald.

Ancient Egyptians were mining emeralds as far back as 330 BC and Cleopatra was known to favor jewelry and adornments fashioned from the mesmerizing green gem. She also reportedly gifted emeralds to visiting dignitaries as a demonstration of her generosity, wealth and power.

The Gemological Institute of America reported that when Spanish Conquistadors discovered rich sources of large, fine-quality emeralds in Colombia during the 16th and 17th centuries, the native Incas had already been using emeralds in their jewelry and religious ceremonies for 500 years.

Emerald is the most valuable variety of the beryl family and is known to display a wide variety of visible inclusions, which are referred to as “jardin” (French for “garden”). These imperfections do not detract from the stone’s beauty but, instead, give each stone a unique fingerprint and distinct character.

The name “emerald” comes indirectly from “smaragdos," the ancient Greek word for green gem. The word later evolved into the Latin "esmaraldus" and then the Middle English "emeraude."

Besides being the birthstone for the month of May, it’s also the preferred gemstone to honor 20th and 35th wedding anniversaries.

Emerald owes its delightful color to trace impurities of chromium or vanadium in its chemical composition.

While emerald rates a relatively hard 7.5 to 8 on the Mohs scale, the gem is more brittle than other members of the beryl family due to its natural inclusions and must be treated with extra care.