Mascolo, 27, took to Instagram over the weekend to show off the diamond-studded, openwork gold ring, which he proudly wore on the ring finger of his left hand. While couples regularly exchange wedding bands while taking their vows, the concept of engagement rings for men is a novel one.

From the series of photos posted to his Instagram, we can see that Thorne delivered the ring while sharing a romantic meal at Il Pastaio in Beverly Hills.

Mascolo wrote, "She got me an engagement ring" and punctuated the statement with a white heart emoji. 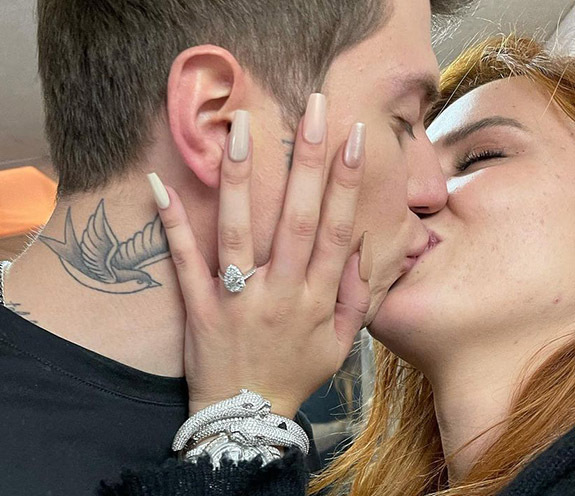 Four weeks ago, Thorne and Mascolo thrilled their fans with Instagram posts announcing their engagement and showing off Thorne's new ring. The proposal took place after the couple shot the final scene of their movie, Time Is Up.

"She said YES," commented Mascolo, while adding two emojis: a diamond ring and a black heart.

“He knows exactly my style @b3nm,” Thorne wrote on Instagram.

Jewelry-industry experts estimated that Thorne's pear-shaped center stone weighs close to 4 carats and, depending on the gem's quality, could be worth up to $150,000. The large center stone is surrounded by a halo of smaller white diamonds on a white gold or platinum diamond-accented band.

Thorne and Mascolo officially announced they were a couple in June of 2019. Their wedding will include celebrations in both the US and Italy.