Paris Hilton may have finally found her Prince Charming. Venture capitalist Carter Reum proposed to the heiress/entrepreneur over Valentine weekend with an emerald-cut diamond engagement ring fit for royalty.

The ring design by jeweler Jean Dousset — the great-great-grandson of famed French jeweler Louis Cartier — takes its inspiration from the architectural elements of the iconic Grand Palais, the exhibition hall and museum complex located at the Champs-Élysées.

"Jean Dousset looked to the city of light when designing my one-of-a-kind engagement ring," Hilton explained on her website, parishilton.com. "Influenced by both classical and Art Nouveau motifs, it is framed by forms that resemble the vaulted glass ceiling of the Grand Palais."

Hilton named her ring "Paris" and said that it appears to be lit from within. The large center stone is flanked by two trapezoidal stones and accented with dozens of smaller stones throughout the elaborate setting. 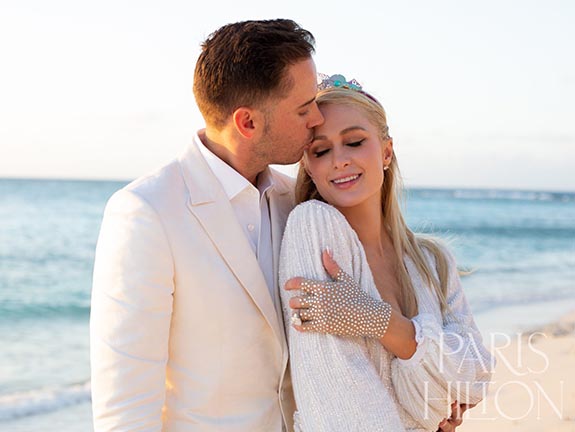 The 39-year-old Reum popped the question while the couple celebrated Hilton's 40th birthday on a private island. It seems as if Hilton might have been aware of Reum's intentions because her beach attire included a Loschy crown and her signature fingerless gloves. The couple's family and friends were also on hand to share in the celebration.

In a series of Instagram posts, Hilton said that her fairytale dream came true and dished the details of the romantic proposal.

She wrote, "When you find your soulmate, you don’t just know it. You feel it. My love & I have been together since our first date, and for my birthday, he arranged a special trip to tropical paradise. ️ As we walked to dinner along the beach, Carter led us to a cabana adorned with flowers and dropped to one knee. I said yes, yes to forever ❤️ There’s no one I’d rather spend forever with. ✨ Here's to Love - the Forever Kind #Engaged #SheSaidYes"

On her YouTube channel, Hilton shared a video of an artist hand painting her namesake ring in Dousset's design studio.