Each week during the NFL season, Snickers will be presenting a blinged-out "S" pendant to the league's "Hungriest Player." The chain will pass from one top performer to the next, based on their successes both on and off the gridiron. 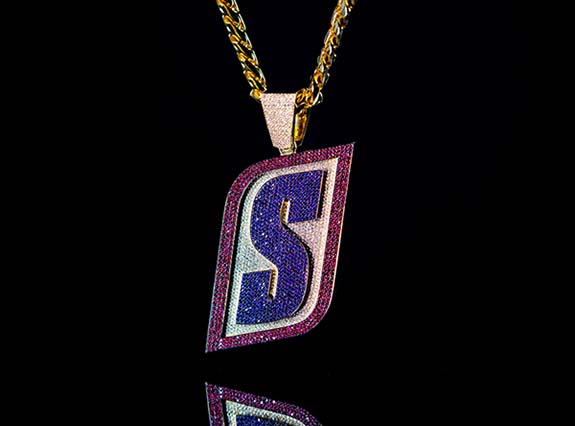 The "S" is actually the first letter of the iconic Snickers logo beautifully rendered in 47 carats of brilliant-cut blue sapphires, white diamonds and red rubies. The pendant dangles from a thick Cuban link chain.

As Snickers' social media campaign explains, "Only the hungry can storm the gridiron, but only the hungriest will wear the chain. Follow this season @snickers."

As the end of the season nears, Snickers will be inviting fans to weigh in on which of the weekly honorees was the hungriest. Snickers will then offer the jewelry for sale with the proceeds going to the hungriest player's favorite charity.

"When Snickers hit me up about collaborating on a chain to honor the hungriest players in the NFL this season, I was immediately all in," said Los-Angeles-based jewelry designer Ben Baller. "The idea of passing this Snickers chain to a different player each week is just crazy, so I knew we'd have to come up with something next level to make sure it served as the ultimate reward for hustle and success."

The familiar Snickers candy bar features the product name spelled out in capital blue letters against a white ground and bordered in red. Baller reinterpreted the logo as a single letter "S" rendered in blue sapphires set in yellow gold against a ground of white diamonds and bordered in rubies. Mimicking the candy bar, the border is rounded on the upper-left and bottom-right corners and pointed on the other two.

Established in 1930, Snickers continues to thrive with annual worldwide sales of more than $2 billion. The brand got a boost in 2012 with its wildly popular "You're not you when you're hungry" ad campaign. After its first full year, the clever ad series helped increase the global sales of Snickers by 15.9%.

Fans can follow the #SNICKERSchain journey this season on social media via @SNICKERS to see which player receives the chain each week. For more information, visit www.snickers.com.