British superstar Ed Sheeran is proudly wearing an engagement ring and doesn't understand why the concept is considered so avant-garde.

"I never saw why men didn't wear engagement rings," he told a reporter for Lorraine, a British lifestyle and entertainment TV show. "It's the same commitment either way. Cherry [Seaborn] made it for me herself out of silver clay. I really like it."

Sheeran proposed to Seaborn over the New Year's holiday and announced the exciting news to his 20.6 million Instagram followers on January 20. 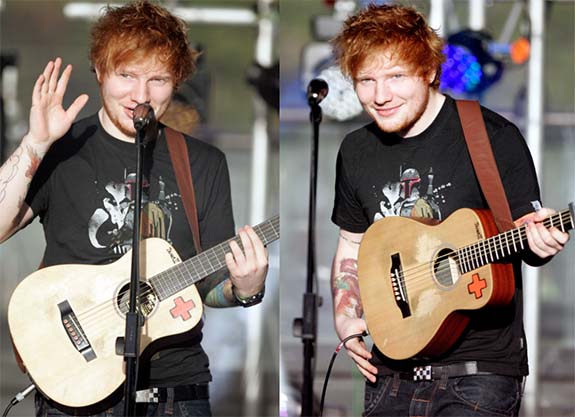 He posted a candid photo and wrote, "Got myself a fiancée just before new year. We are very happy and in love, and our cats are chuffed as well xx." ("Chuffed" is British slang for "very pleased.")

Not only were their cats pleased, but so were Sheeran's fans. More than 5.2 million of them "Liked" the 27-year-old singer's post.

But, in the days following the announcement, reports started surfacing that the star was wearing a ring on "that" finger. Did they secretly tie the knot?

Sheeran put that rumor to bed during a radio interview with Australian hosts Kyle Sandilands and Jackie O Henderson.

"We didn't get secretly married," he stated. "No, she made me this ring out of silver clay, so we were both kind of wearing rings."

His ring also serves another purpose: "It also means that nobody will know when we have gotten married," he said.

The "silver clay" that Seaborn used in the fabrication of Sheeran's ring is a crafting material made of very small particles of precious metal mixed with a binder and water. It can be easily molded by hand into jewelry and then fired in a kiln. The binder burns away and only the precious metal remains. Unclear photos snapped by the paparazzi seem to show him sporting a very simple silver band made of this material.

Sheeran and Seaborn have yet to announce a wedding date, but it was revealed that the British music man has submitted plans to build a Saxon-style chapel on the grounds of his Suffolk estate.